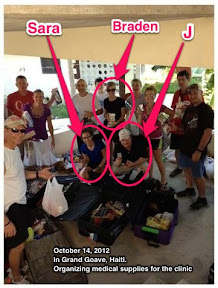 Yesterday was full and busy for our little gang. I talked to them at separate times, so I’ll give you what they each gave me. This picture is from Sunday.
The girls worked hard and got tons done at the clinic by organizing A LOT. They also worked a lot with the kids by doing skits and object lessons about germs, teaching and giving shots. Braden loved laying hands and praying for a woman that came in. Sara was taking a shower when we talked so I didn’t get to talk to her much but got from Braden that Sara is fantastic. As I said yesterday, this is of absolutely no surprise. Sara is always fantastic (LOVE that girl!).

Here’s a pic from yesterday. In the first picture, Sara is to the left of the Haitian woman, Braden is kneeling in front of Sara with her hands on her praying. The last picture is of the children at the Shiloh school where they worked (picture courtesy of Brent Gambrell Ministries).

Braden went on and on about the food. She loves it and is eating things she never eats at home. She told me she didn’t know what she was going to do when she gets back to America after eating their food. I said the same things when I was in South America. Of course, you guys know that something funny always happens with the girls. Yesterday as they were walking the path, a little girl comes to them. This isn’t unusual as they are fascinated by them. Braden learned a little of the language and greets them. This particular little girl came up and started talking to them and saying words in her language they didn’t understand. This little girl looks at them like they are insane! When their interpreter came up, the girls asked him what a certain word meant. The interpreter looks at them like they’re insane and has no idea so he went to the little girl and asked in Creole what she wanted to say to the girls. Immediately the interpreter and everyone around starts laughing as they find out she was speaking ENGLISH to the girls the WHOLE time and they didn’t understand her! Haha! Of course Braden and Sara crack up in themselves too.
Braden sang for worship last night. When I asked what the favorite thing of the day was, it took a few minutes because they loved everything. Finally, it was when they were walking back from the morning work to eat lunch (which is about like walking from my house to Springfield in rough terrain) a group of kids came by and they all started giving them high fives and giggling. This was so special because they knew they were connecting with the locals. Remember, no one has served this area yet besides nurse Jenny! The kids go to school in two shifts. This means the teachers are there teaching from 7am-7pm. It was a new shift of children that was coming by.
Today they go back to the clinic to work and then on to the orphanage. They are excited to go there! They are doing a craft where they are taking pictures of each child, helping them frame them to take them home. To understand the significance of this, read my previous post titled “Mirror Mirror” written by Brandon about an encounter J had yesterday.
When I talked to J, he was full of things to tell me too. He also went on and on about watching his daughter Braden jump in on things. He called her “on fire” and loved watching her work and embrace the kids, the adults, the other missionaries. He loves how she doesn’t even think about how she impacts people and just jumps in. He took pictures of her giving the kids shots. She has never been squeamish about needles and the like, but this fascinated him because he hates them. He went on and on about her singing last night and her volunteering to do tonight’s devotion with the missionaries. He said Sara is jumping right in too and is doing extremely well. He is so proud of both of the girls.
He loves the food as well. He loves working with Nurse Jenny and mentioned she reminded him of a sweet missionary woman named Gladys Farmer that we both new as children. Any of you reading this remember her? AWESOME woman of God! She touched so many people everywhere she went. Nurse Jenny was a nurse in New York City that came down to Haiti with Brent two years ago, heard God’s call and moved there. She is doing so many good things there.
After spending the morning at the clinic, he stayed at the compound after lunch (by then, the Haitian guys were back from that 6 hour trek to the market getting the supplies that he told them to get!) and started working there. Not without first giving the men going with the girls STRICT instructions on watching his girls…where to walk so he can see them at all times, etc….even made him promise! Ha! And this was an american missionary! Ha!
He and his team are building decks, doing plumbing, fixing faucets, putting locks on the dorms, etc. There are two Haitian women doing the cooking for them all. He said right after one meal, they start preparing for the next one because it’s all from scratch. They have a spot under a tree they like to go to sit and start meal prep. He was busy working when these women came screaming and yelling because 5 snakes were after them. J and his men took care of them but it made him laugh so hard! His laugh makes me laugh. Oh how I love that man!
He mentioned a conversation he had with the locals about the local “law”. He learned that all they need is three witnesses saying you did a certain thing, and the law enforcement would come shoot you. Especially over stealing. Interesting. Wow.
His favorite part of the day was building the deck, watching all the kids at the clinic and the encounter he had on the path with the lady and the camera. Read my post titled “Mirror Mirror” about that.
Today, he finishes the decks, plumbing for the bungalows, builds sink supports. They have a generator for about two hours a night so he is going to do some plugs for them.
Prayer requests:
All of them mentioned rehydration. They are drinking, but it’s easy to get busy and forget….and they are sweating more than usual so they’re losing more than usual. I sent them with some rehydrating powder to put in water and drink. Pray for their health and rehydration. This can be dangerous for anyone but especially for a man with a stint. Also pray for opportunities to share His love and message. Pray continuously as you think of them.
.